How to deal with an insecure partner 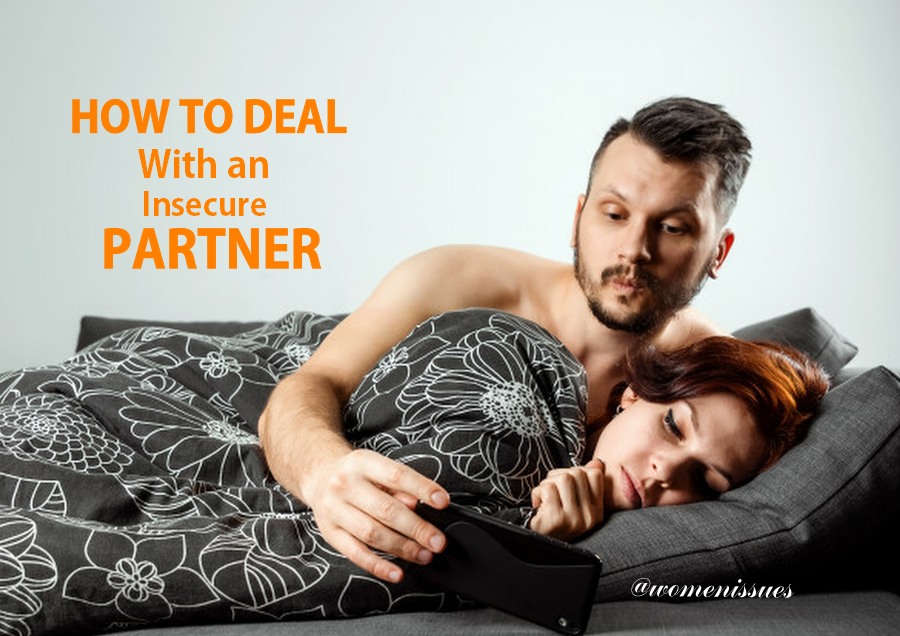 There are ways to deal with insecure partners and even make them go away altogether. Insecurity in a relationship can cause a lot of problems and seems to have already led you to read this article to seek out ways for how to deal with them. You alone cannot fix these problems, but you can do certain things to make your man feel secure with you. If you feel like your guy is worth the extra effort to help him get past his insecurities in the relationship, then here are tips on how to deal with an insecure boyfriend:

Reassure him
He should already know, but hearing it time and time again is one of the many ways to reassure him. More often insecure partners are well aware of what they are insecure about. Normally men try their luck even where they think the woman is way out of their league, then to their surprise they at times get lucky. In situations like this, it might be because he thinks you are too good to be with him so telling him how much you love him will push him to think differently. He will feel as though he doesn’t have to worry about you running off with someone else.

There’s only so much you can do but sometimes you just need to tell him that he has nothing to worry about because he means a lot to you. Not only verbally confirm but actions will go a long way that you are there for him and want no one else. It might seem tedious to do this all the time but it will be worth it. Just do not overdo it or he might just think you are saying stuff to throw him off.

Make sense of how he feels cherished and do that
People don’t feel love the same. You might need physical affection or verbal affection to feel love whereas he might feel love by being needed by you. Figure out which way he feels the most loved. You can even ask him. Ask what things you do make him feel the most valued and thought about. Then do those things more often so he is not as insecure.

Keep the communication going strong
This is the most important part of a relationship and often, the responsibility will fall on the women to keep this up. Generally, men are not good at speaking about their feelings. Find a way to make him open up to you and make him realize he needs to talk to you more so you can work together. As long as you continue to prompt your man to talk about the things that are bothering him, you will be able to work it out. Ask him questions. Tell him how you are feeling. Just get him talking about how he is doing. He might not be very good at this at first but the more you ask him to tell you how he is feeling, the more naturally it will come to him.

Keep in contact without being asked
Just check-in by dropping him a “I’m thinking of you” kind of message. It’s ok to check on him first, it’s not that big of a deal. Tell him when you walk from the coffee shop home. Send a short message when you are done from work. You don’t have to give him a play by play of your entire day, but just let him know what you are up to so he doesn’t need to feel anxious and worry.

Openly discuss his past
His insecurities may stem from bad relationships in the past and he is taking it out on you. Despite the fact that it might be intense for you to hear, get some information about his past connections and what turned out badly. In the case that somebody undermined him previously, it might influence his new affair with you now. Since a guy’s past can tell you a lot about their insecurity issues, go ahead and discuss it with him. At first, he might not want to open up about it. Make sure he knows you are willing to talk about anything he has to say so he will feel more comfortable going to you.

Don’t lie to him about anything
If you lie and he catches it, he won’t be able to trust you. Furthermore, not having trust will worsen his instabilities a great deal. So, if you can avoid it, just don’t lie to him. Tell him the truth whenever you can and make sure it is right away. This will build up your trust and that will help his insecurities settle down.

Give him a chance to meet every one of your companions – even the folks
The main reason your guy may feel shaky is on the off chance that you continue disclosing to him you are with this individual or that individual and he has never met them. This is particularly valid if you have plenty of guy friends. On the off chance that anything, he ought to meet the folks you invest energy with. Otherwise, it will be really easy for him to paint them in a negative light before he even knows them. He will get insecure that you are spending a lot of time with other guys and it will become a really big issue for the two of you.

Prove he has nothing to worry about time and time again
This is easy. Just be faithful and be there for him. Always prove his worst fears to be false. This is all it takes for his insecurities to be less and less prominent. He will still have them, sure. But the stronger and healthier your relationship is, the less he will feel insecure.

Don’t point out his insecurities
Never bring up his insecurities and never mention them in front of his companions. He knows what they are and it will make him feel worse if you point them out and especially if you make fun of them. He also really doesn’t need his friends to know of his insecurities. Folks feel weakened when their companions know their shortcomings. Just keep it to yourself if you know about them.

Open up to him about your insecurities
Its one of the important way on how to deal with an insecure partner. Knowing he is not the only one with insecurities will help him feel a lot better. So, talk about yours! Let him know you have issues too and you are not always happy when it comes to certain things. If he feels like he can be vulnerable with you about something you both are dealing with, it will be much easier to handle.

All relationships requires effort from both partners;  if one feels it is worth a try, then you go an extra mile to make it work. Insecurities can be energy draining and suck out all the fun in the relationship but if the insecure partner starts seeing reason & is willing to deal with them then all will be worth it in the end.